skip to main | skip to sidebar

Well thanks to the most excellent frame warranty from Trek I now have my replacement Rig frame. It was a sad day to take the old frame down to bare metal. That whole process took 10 minutes which included the 5 minutes I spent finding a shoe box to put the parts in. Add another few minutes for drinking beer and really it took about 3 minutes to strip the frame.

One last look at the old friend. 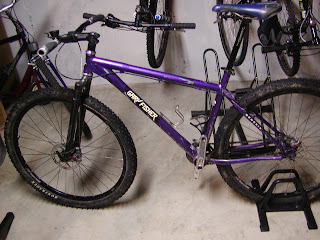 Here is the new frame when I started. It is pretty bright. Ready for a snow ride. 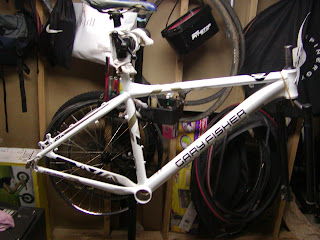 A few things stand out different from the original Rig. First, all the frame tubes are a quite a bit different. Gone is the 2" extension of the seat tube above the top tube.

Second, it is no longer a single speed only frame. Yeah it has an eccentric bottom bracket, but also has all the frame mounts for adding a full compliment of gears. The original Rig frame has a vertical non-replaceable drop out. You bend it you are screwed. But how could you bend it if you don't have a rear derailleur? The 2010 spec model has a replaceable drive side drop out that can swapped for one that has a derailleur mount. Might be useful down the road, or trail.

The next big difference is the 2010 headset has an integrated headset. No more Chris King for me. I now own a Cane Creek AER integrated headset that has the fancy new bushings. No more traditional bearings. A sealed bearing's job is now being performed by a super slick low friction PTFE bushing. Pretty cool and hopefully it holds up over time. I think it will based on some knowledge I have of PTFE.

The final difference is in the bottom bracket. The 2010 uses a narrower bottom bracket than before. Not a big deal. I could of used my old eccentric but opted to spring for the new narrower one. The two pretty much look the same. 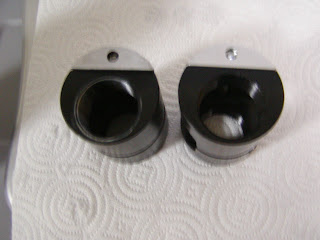 Much to my surprise the new one had another big difference when you look at them at a different viewpoint. It appears that folks Trek learn the librally use an end mill. 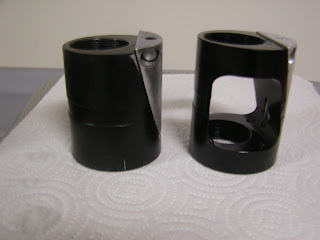 That mass of metal removed is approximately 50% reduction in mass. Not too shabby. 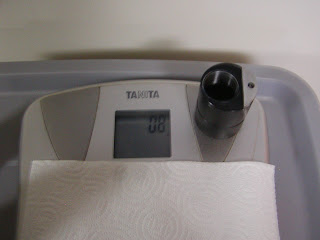 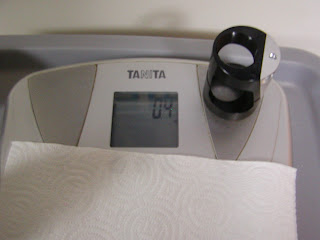 I think I'll try and locate an end mill and hog out the my old one to retrofit Sara's Rig with a lighter enccentric.

In the end I was happy with the build. It was pretty painless really. In case you were wondering, yes, I did install the flask first. Now if the trails would either A)Freeze or B)totally dry that would be swell so I can ride my new ride. 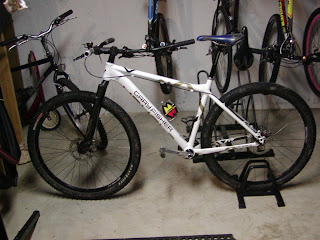